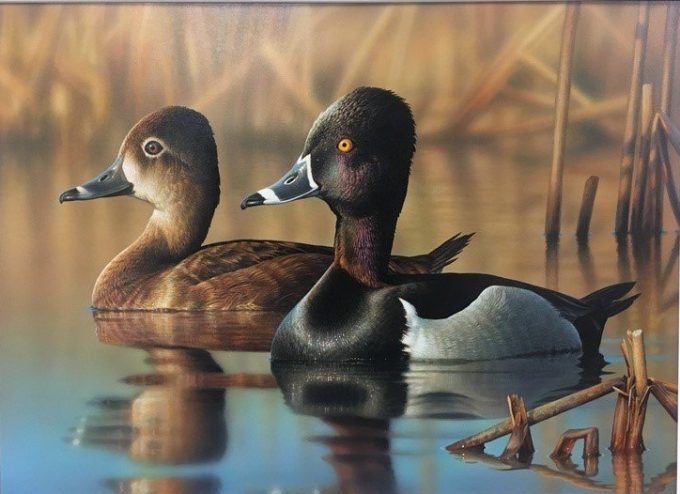 Image size is 6 1/2″ x 9″ and overall paper size is 12″ x 14″. Each print is numbered and signed by the artist and enclosed in an acid-free protective folder. All editions require the purchase of a set of stamps. Shipping arrives at Barnel’s. Pick-up in store is available or shipping to residence.

The Louisiana Duck Stamp Program includes a contest to select the design of the annual state duck stamp. The featured species for the 2021 contest is the mottled duck. Sometimes called black mallards or summer French ducks, mottled ducks are large, dark-brown, dabbling ducks that frequent coastal marsh and adjacent agricultural fields and pastures along the western Gulf Coast from Mexico to coastal Alabama. Because mottled ducks live their entire lives in coastal wetland habitats, they are at risk from the degradation and loss of those habitats. Both mid-winter and breeding population estimates for mottled ducks have declined markedly in the last decade, resulting in a growing conservation concern for this iconic Gulf Coast species.

The 2020 contest was held in October 2019 with ring-necked duck as the focal species. Adam Grimm of South Dakota won the contest with an incredibly realistic pair of resting birds in a classic marsh scene.

All Art Artists Pat Abernathy Under $200