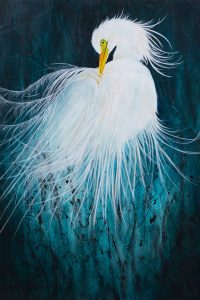 An established artist from South Louisiana, Tanya Firmin Dischler, originally from Franklin, now resides in Mandeville, Louisiana. She studied at the University of Southwestern Louisiana, Louisiana Tech University and various artist workshops throughout the United States, Mexico, France and Indonesia.

Dischler has a unique way of expressing her interest in nature. Her subjects include animals, birds, fish, frogs, and the flora and fauna of South Louisiana and anything else that imposes itself on her imagination. With her ability to depict these every day subject matters intertwined with interesting background shapes and patterns, her paintings are not as simple as one would assume. She has considerable facility with technique and imagery and has a totally unique way of expressing her love of nature in all of her vivid paintings. The fresh approach in the use of colors skillfully applied to each of her paintings gives her compositions the unique feeling of “coming to life”. Dischler’s paintings are mysterious and intensely bright acrylics that possess the visual and visceral impact of abstraction, while the main subject matter of each painting remains easily recognizable.

She has participated and won in local, national, and international exhibits. Her work is in numerous private and corporate collections in the United States, France, England, and Australia. Her series, “Burning Cane” was featured in Louisiana Life Magazine (March/April’12) The article is entitled “Memories of a Burning Landscape” written by John Kemp . She has had the distinct honor of being invited by The First Lady, Surpriya Jindal, to showcase paintings in The Governor’s Mansion in Baton Rouge, Louisiana.  Her painting, Louisiana Phoenix, was selected by the St. Tammany West Chamber to be featured on the new Guide and membership directory. Dischler’s work was published on the cover of The Journal Of the American Veterinary Medical Association in honor of an award received at LSU Animals In Art Exhibit. Her work has also been published in Art Business News, American Artist Magazine, Watercolor Magazine, Inside Northside Magazine (Cover), Women in Business .  She  has participated in The New Orleans Jazz and Heritage and numerous other Festivals in the southeast. Dischler teaches fun, creative workshops in her studio, Beyond the Bayou , located in Old Mandeville.